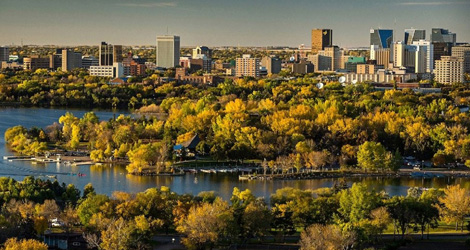 Saskatchewan is a prairie and boreal province in western Canada, the only province without natural borders. Saskatchewan receives more hours of sunshine than any other Canadian province. The province lies far from any significant body of water. This fact, combined with its northerly latitude, gives it a warm summer, corresponding to its humid continental climate in the central and most of the eastern parts of the province, as well as the Cypress Hills; drying off to a semi-arid steppe climate in the southwestern part of the province.

Historically, Saskatchewan’s economy was primarily associated with agriculture. However, increasing diversification has resulted in agriculture, forestry, fishing, and hunting only making up 6.8% of the province’s GDP. Mining is a major industry in the province, with Saskatchewan being the world’s largest exporter of potash and uranium. Oil and natural gas production are also a very important part of Saskatchewan’s economy, although the oil industry is larger. Among Canadian provinces, only Alberta exceeds Saskatchewan in overall oil production

The SINP is Saskatchewan’s Provincial Nominee Program. Through this program, prospective immigrants with the skills and experience targeted by the province may receive a Saskatchewan Provincial Nomination Certificate, which will allow that foreign national to apply for Canadian permanent residence with processing times that are faster than other Canadian immigration classes.

The SINP accepts applications under the following categories: